While living the party life might sound good, there are some unforeseen consequences that most don’t really think about before beginning the party.

If you haven’t already figured it out, alcoholism is one of those unforeseen consequences that we young people only pass off as being what happens to others. Alcoholism has many unforeseen consequences, including: losing your family, losing your job, prison, poor health, failing liver and many others which you likely easily see. However, the losing of one’s mind is one that most don’t think about, including me, until too late.

Some of us have known alcoholics who become sloppy. By sloppy I mean unkempt, slurring of speech, red-faced, difficulty walking, blurred vision, slowed reaction times, impaired memory, etc. These symptoms are sometimes referred to as alcoholic dementia. And most believe you stop drinking and everything gets better.

It Doesn’t Always Get Better

Alcoholics often suffer from poor nutrition. First, if the alcoholic is drinking they typically don’t eat well anyway. And because they are alcoholics, their body doesn’t process what they do eat very well. These two ‘catch 22’ factors then result in the alcoholic seemingly losing their mind.

Thiamin is one of those nutrients which are affected by the alcoholic’s poor nutrition. Thiamin, or Vitamin B1, is necessary in the body for many things, including brain synapse efficiency. Without Thiamin, the brain is not able to function properly, and over time many alcoholics lose memory and judgment. This condition is known as Wernicke’s encephalopathy. The symptoms of Wernicke’s encephalopathy include mental confusion, paralysis of the nerves that move the eyes (i.e., oculomotor disturbances), and difficulty with muscle coordination. For example, patients with Wernicke’s encephalopathy may be too confused to find their way out of a room or may not even be able to walk.

Wernicke’s can be directly traced to that Thiamin deficiency. The alcoholic does not eat properly, and does not eat foods with Thiamin. Also, the Liver is not functioning, so it is not able to metabolize the Thiamin and therefore the body and brain cannot use it to function. Yep, here is that catch 22 thing again.

Fortunately for Wernicke’s, if caught early enough, it can be treated easily by infusing the patient with high doses of Thiamin and other vitamins (rally packs for example). 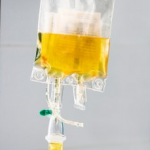 Un-fortunately, many times those suffering from Wernicke’s digress further, and Wernicke’s becomes Korsakoff’s psychosis. Korsakoff’s psychosis, a chronic and debilitating syndrome characterized by persistent learning and memory problems. Patients with Korsakoff’s psychosis are forgetful and quickly frustrated and have difficulty with walking and coordination. Although these patients experience problems remembering old information (i.e., retrograde amnesia), it is their difficulty in “laying down” new information (i.e., anterograde amnesia) that is the most striking. For example, these patients can discuss in detail an event in their lives, but an hour later might not remember ever having the conversation.

My wife suffers from Korsakoff’s psychosis. Even though it has been over 3 years since she stopped drinking, and 6 months since her transplant, she suffers greatly from memory problems. And just like indicated above, she remembers a lot of things from her past, but is unable to remember anything from her alcoholic period (this is a blessing), and has a terrible time laying down any new information.

I admit that I wasn’t really sure what this meant at first, even though there is plenty of literature describing it, and available to read on the internet. I think however, it all finally made sense to me, when one of her doctors (in this case her psychiatrist – who she sees because of some of the medicine she takes) explained it to me with one very blunt statement. “Pat, you have a choice to make. You can put her into a home, or you can bring her home. But if you bring her home, you cannot hold her accountable for anything she does: as she has no judgment” (NO should be capitalized, in bold and underlined).

On the other hand, my wife has always been a kind, happy and very social person. She is almost always happy, and full of wanting to do things with and for everybody. In some ways, she has regressed to an almost child-like happiness that is infectious to all around.

A great resource, concise and easy to understand can be found at The National Institute on Alcohol Abuse and Alcoholism

← Who is an alcoholic?
Your Choices are Known Forever! →

4 comments for “An unforeseen consequence”