DOWLING was derived from the Gaelic O’Dunlaing, one of the seven septs of Leix, which was located in the west of County Leix, along the banks of the river Barrow. From there, they spread southwards into County Kilkenny and westwards into County Carlow and County Wicklow.

The name comes from Ireland at around 350 AD.

The name is a Gaelic Irish Surname that originally referred to the ‘Sept’ of UiDublhaoidh who were Lords of Fertullagh in the County of Westmeath around that time.

In the ancient kingdom of Leinster (a province which covers the South-East of Ireland) were the Irish Chiefs and Septs of Hy-Kinselagh and Cualan. In their lands the Dowlings were Chiefs of SiolElaigh and the Lagan. 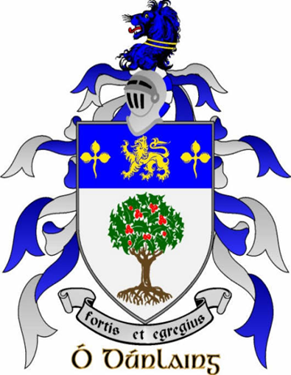 The Dowling Coat of Arms, are the only coats of arms registered with the Chief Herald in Dublin in the name of Dowling. – assigned to Mortagh Dowling of Kilkenny,

Silver shield with a holly tree showing its roots in its natural colours. Then on a blue top third of the shield (note: this is part of the design rather than a denotation of the joining of families), a lion facing left with foreleg raised between two leaves with three petals showing stalks in gold.