Life is many moments in time

Writing this post on 8/18/14, I am sitting in the hospital waiting area, as my wife Vicki is again in surgery. Today she is having ankle surgery. 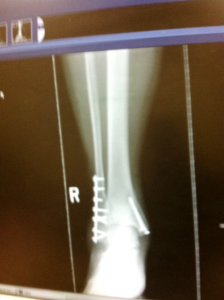 Ankle before surgery to fuse

At that time, Vicki had been home for about 6 months, following her 4 years of alcoholic wandering, her 1 month of hospitalization and her 2 months of nursing home living. After she broke her ankle, it took a few days to stabilize her, before operating. They placed a metal plate and 8 pins on the Fibula (anterior bone) and 3 pins on the Tibia (interior bone). This procedure resulted in 8 days of hospital, then Christmas in a nursing home (where they really didn’t know how to care for her), and another week in the hospital before coming home. 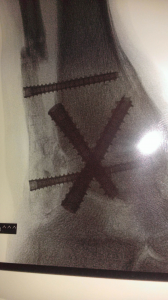 Two and a half years later, she has secondary surgery due to the degeneration of her ankle joint, and absence of cartilage. This surgery will remove the plate and pins. The joint between the Tibia and the Talus (connecting foot to leg) will be fused (scraped flat, and additional bone from a bone bank will be added to ensure a tight fit) with three large screws to hold the Tibia, Fibula and Talus together.

What else is going on?

While I am waiting for her surgery to end (scheduled for 3 to 4 hours), I am contemplating all of the bills to be paid, worst of which are tuition, property taxes and house payments. Tuition is first, because them not going to school affects their future.

Tuition: College – I figure that college (2 kids) will allow our kids to at least complete this semester without payment. I figure they will withhold grades, and not allow them to enter 2nd semester until I catch up. High School – One son is in his junior year of high school, and I am unable to pay his tuition as well. It figures that they will work with me, at least I hope, because of the number of children who have already graduated from the same high school (five), and he because he starts on the soccer team? I hope that I can take care of the tuition before it becomes an issue.

Taxes and House Payments: Property Taxes – Besides tuition, Hamilton County wants their property tax. Our Property tax is paid twice a year, and we have missed those last two payments. Although unlikely, I figure the government will be harder to please than the mortgage banks. Mortgage – The first and second mortgage are both late by about 4 months. I have filed applications to adjust and both have turned me down. I don’t understand their reasoning, because now they are more at risk than they would have been if they worked with me prior to these problems.

As if that was not enough:

Tonight, I have to find a ride for our football-playing son, a ride home for our high school soccer playing son, and a ride to and from soccer practice for our other son. We had the foresight to start dinner tonight (chicken, cubed with carrots, celery, corn, peppers over egg noodles); so that the kids could, all eat whenever they were able.

And I know that at the end of the day, another day will be completed, and a sense of accomplishment will prevail.

Why would you care about all our problems?

You probably don’t care about our problems. I only use them as examples to aid in understanding (and because it is therapeutic for me to write about them). 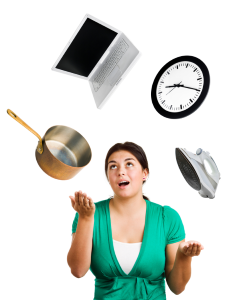 juggling the moments of life

The point is Life is many small things that happen at or about the same time, and that we must embrace if we are to be successful. We ALL juggle many balls. In fact, I am very confident that others juggle more, others different balls, and still others larger balls. That is not the point. The point is our success in juggling all these balls lies within our willingness to embrace them, to act upon them, to keep them moving, and to focus on their balance. How we deal with these balls when they are in the air, will determine if they continue, or all just come crashing down.

It is funny how The Choices we Make (seemingly, even the bad ones), always provide us with options. How our reactions to those choices, and our subsequent choices give us the opportunity to grow and thrive – or shrink and shrivel away. Maybe that is what the saying “God never gives you more than you can handle” actually means? Maybe there truly is a “silver lining” in every cloud? Seize your challenges, make good choices and revel in your accomplishment.

← Rules of a Scientist Life
MELD scores and Liver Transplants →

2 comments for “Life is many moments in time”