Liver disease is any disturbance of liver function that causes illness. Liver disease is a broad term that covers all the potential problems that cause the liver to fail to perform its designated functions. Usually, more than 75% or three quarters of liver tissue needs to be affected before decrease in function occurs. The liver is a prolific organ, and has the unique characteristic of regeneration.

Liver disease manifests itself from a number of different factors. Alcohol and drugs (even herbal remedies (kava kava, ma-huang) can cause Cirrhosis. Hepatitis A (virus from fecal matter), Hepatitis B, C and D (body fluid exposure) and Hepatitis E (food and water) cause liver disease. Other virus and diseases can also cause liver disease, such as Mononucleosis, fatty liver, Hemochromatosis, Wilsons or Gilberts Diseases, and others. 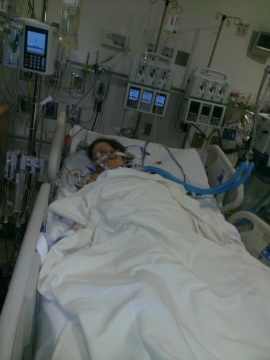 Vicki in ICU after her Liver Transplant

The criteria for those on the liver transplant waiting list, include:

A MELD, coupled with age and blood type determines priority for a liver transplant (a few other medical conditions can also obtain bonus points in the MELD calculations). The MELD score is determined through an algorithm that takes into account your INR (International Normalized Ration measures blood clotting, higher scores meaning blood is not clotting) score, your Bilirubin (yellow breakdown product of blood, high scores meaning it is not being excreted in the bile) score and your Creatinine (breakdown product of creatine, higher scores meaning kidney failure) score.

A MELD calculator can be found at the MAYO clinic website. The Mayo clinic pioneered liver transplant methodologies, and originally came up with the MELD formula (it was originally named the MAYO end-stage Liver Disease). If you would like a MELD calculator in MS Excel format, send me a note and I will send it to you. 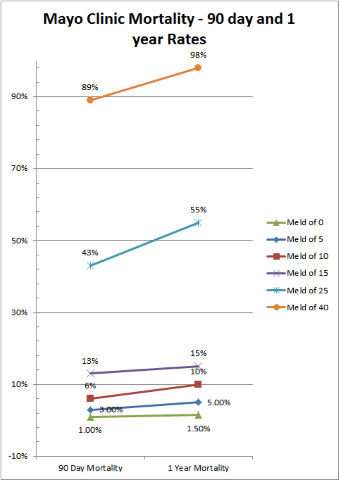 Ideally, a liver transplant happens with a MELD score somewhere between 15 and 25, although this can be rare. In the Midwest, the average score for a transplant is around 22. However, in high-density cities, such as New York or Los Angeles, the average transplant is more like 32.

During these times, Vicki’s MELD score ranged from a low of 14 to a high of 26. For the first year the range was 14 to 18. Later in 2013, especially after complications from dangerously low Sodium levels, her MELD score fluctuated from 22 to 26; the low Sodium scores provided some bonus points. On January 28, 2014 Vicki finally received her liver transplant.

← Life is many moments in time
Now you’ve Done It →