The Greatest Choice I ever Made

I suppose that you could lump the contents of the story you are about to read into several choices that I made. In reality, there were several choices, but I combine them all into a single choice. A choice that in my life was monumental.

In 2007, my wife had started to mysteriously disappear. She would come home late at night (I guess you would say early in the morning). I can remember traveling for work, and she would disappear while I was out of town. And the in early 2008, she finally just disappeared altogether.

I would never have called either of us alcoholics. Vicki was a good wife, and a good mother. She was always with the kids, and we were always doing activities with the kids (come to think of it – we still are). I travelled constantly, but found time to coach kids in soccer, volleyball, lacrosse, basketball and others. And we never had trouble meeting obligations.

Then, when Vicki left the house, I was not prepared, and had no idea what was going on. No idea where she was, what needed to be done at home or school, or what to do about her? Remember I travelled, and Vicki took care of the house. She paid all the bills, took care of the school issues, kept the calendar, etc. So I was completely lost.

One thing I did know? I knew that there was no way our kids were going to experience the issues that confronted other children from broken homes. Vicki’s two children (I always treated them both as mine – so I refer to them as ours) experienced tremendous grief from their broken family. Their father rarely called to talk to them, and when he did make arrangements, he rarely showed up. I can still remember when our oldest turned 18; he called to the house, and asked Vicki if she was 18. Vicki responded yes, and then asked if he wanted to talk to her. His response was simply, “No, I just wanted to make sure she was, so that I can take her off of my insurance”. 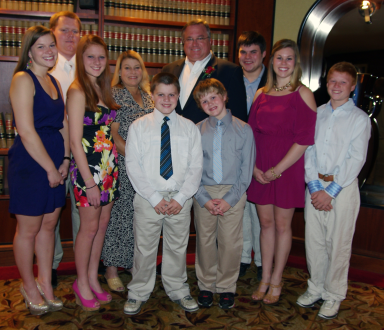 The Clan – except oldest who could not make it

I will never forget the hurt and pain of this single event on my daughters face. Even though I had seen the hurt before, after every failure to show up, it was this pain and grief that I knew I needed to protect all our kids from.

So I became Mom and Dad to my kids, at least to the best of my ability. I remember fondly now, not so fondly then waking up early in the morning to go grocery shopping. I remember staying up late at night to do the laundry. I remember paying bills, making lunches, making the calendar, planning drills and strategy for the teams I coached, and even maintaining my work. Needless to say, I probably remember this time as some of the most productive time I have ever experienced. It’s funny, I don’t remember too many details, but I remember it all.

I don’t think I have ever had as much fun, as I had during this period of my life – especially the fun of getting to know my children; liking my children; watching them grow up and become young adults; meeting their friends; etc. And all this while I didn’t even know it was happening. I didn’t know it was happening until… One day my daughter came in with some friends. They all passed me by working on the kitchen island, catching up on something. I said hi to them all, as I always did, and even laughed with them.

And the next day when I saw my daughter again, she told me that her friends told her how much they liked me. This single comment meant a lot to me, it also taught me that I needed to take time from all the work I was trying to get done, and spend some quality time with my kids.

There were problems and casualties from this time period, but I will always remember this time as the best time of my life – for me and I hope for my family.

Now that I have whetted your appetite with tidbits and clues to a much larger story, you are going to have to wait for future posts to find out more.

We are The Choices that we Make

4 comments for “The Greatest Choice I ever Made”