This post is the first on the topic of the liver. This post will attempt to introduce you to the liver, and how alcohol can affect the liver. Being the first post, it is a high level overview, and I will provide more detail in future posts.

The effects of Alcoholism are many; health, wealth, family, and mind to name just a few. The Liver however is the most often discussed and highest profile affect of alcoholism. 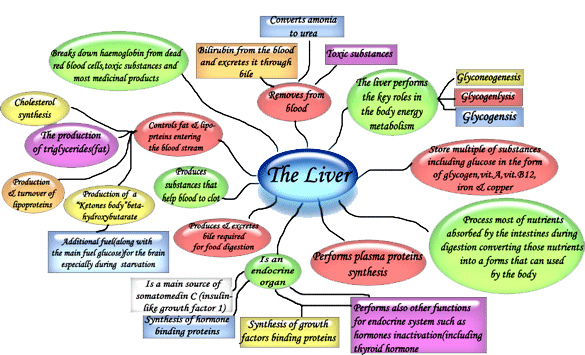 The liver and its many functions – sedico.net

The Liver is the largest internal organ and the largest gland in the human body. The Liver typically weighs around 3 to 3 ½ pounds. The liver plays a primary role in many bodily functions including:

In many ways it serves as both the body’s sewage processing plant, and pharmacy. As the sewage processing plant for the body (the liver cleanses toxins that the body creates as byproducts of digestion, respiration and other body functions), the liver plays a primary role in trying to cleanse the body of the alcohol that we ingest. The liver is able to filter alcohol – to a certain point. Alcohol is not only ingested by us, but the body also produces it as a byproduct of digestion.

Alcohol can be filtered easily in most women and men, with moderate intake. When consumption increases, the liver begins to struggle, and alcohol backs up into the liver. As the alcohol backs up into the liver, the flow of blood into the liver is impacted. Without oxygenated blood to feed the liver, the liver cells begin to die. These dead liver cells are replaced with scar tissue and cirrhosis sets in. As cirrhosis sets in, the liver loses more and more of its function and ability to not only filter alcohol and other toxins, but also to store vitamins, metabolize medicines, create blood clotting factor and many others.

At Livestrong, they liken the function of the liver as: “… imagine the liver as a metal strainer with tiny holes. Each time scar tissue forms, more of the holes are plugged, meaning fewer and fewer particles can be filtered through the liver.”

Fortunately for us, the liver is the only organ in the human body that is able to repair itself if given the chance.

Because the liver plays such an important role in body function, we should protect it from damage and harm.

If you would like to find out more about the liver, Medicinenet is a great place to find information about the Liver and its functions.

← The Greatest Choice I ever Made
Who is an alcoholic? →