Top Ten Traits of an Alcoholic

Writing of alcoholics, I wanted to provide what I believe to be their Top Ten Traits. I would love to hear back from you, about your ideas and any traits you think should also be on the list.

Careless:        Like a child, act without thinking. I want it now despite the consequences. 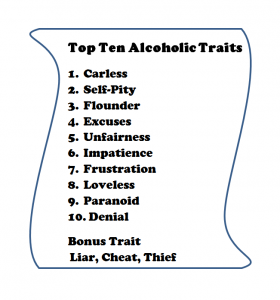 How do you know There an alcoholic

Self-pity:        Poor little ole me. Nobody understands me, woe is me

Flounder:       Generally, do not do as well as their skills allow, they give up.

Excuses:        Tend to blame others for their problems/mistakes. Not their fault. They hate the world

Unfairness:    Everybody is against them and nothings fair. “wah wah wah life’s not fair”.

Patience:        Too difficult to cope with negative feelings/situations for any period of time.

Frustrated:     Frustrated quickly, erupting into anger if something doesn’t go their way

Loveless:       “Why would anyone want to love someone as worthless as me?”

Paranoid:       Everyone is out to get them – They feel they are being followed and watched.

Bonus Trait – This trait is so well known, it is simply a given. It should be a list of its own.

Liars, Cheats and Thief’s: They will make any excuse, tell any lie, cheat anyone and steal from everyone possible; especially their family, in order to drink.

← Lead through Actions
Rules of a Scientist Life →

2 comments for “Top Ten Traits of an Alcoholic”