Your best self is waiting to be unleashed

It has been a while, over a month since I last posted. The reason for this is two part.

On my journey back to writing this blog, I have suffered some tremendous writers block, motivation issues and time constraints. But now I am back.

In this issue, I wanted to relay to you some inspiring words from a fellow blogger, which have helped me to get back on the proverbial Horse.

Those words, from Benny Hsu and his Get Busy Living blog, are: “Your best self is waiting to be unleashed.”

Benny says, “When we were born, we were born with no fear and no idea of what wasn’t possible. But as we grew, and told our dreams to adults we became this person that had so much potential inside, but covered in layers of self-doubt, unhappiness, resistance, fear, and conformity”.

To this point, he tells a story of our potential, using The Golden Buddha of Thailand which is hundreds of years old. Here is that story – and I hope that you get out of it the inspiration I did. 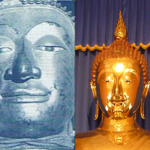 Wipe away your exterior to reveal your golden self

In 1955, a construction team in Bangkok, Thailand was moving the 10 ft. high Buddha from a temporary shelter, where it had been sitting for 20 years, to a new temple. The statue had been sitting under a simple tin roof because, honestly, the statue was not that attractive.

A crane was supposed to move it carefully, but a cable broke and the statue fell in the mud. Workers fled because dropping a Buddha statue was seen as a bad omen.

The next morning a temple monk went to go check on the statue. Through a crack in the plaster he noticed a hint of yellow.

After removing all the plaster, the monk discovered that the forgotten Buddha statue was actually made of pure solid gold. 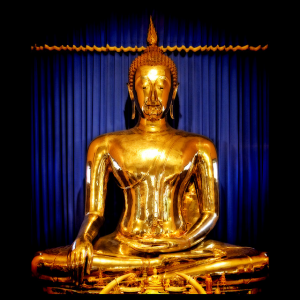 It is the largest gold statue in the world and weighs a unbelievable 5.5 tons.

Later, it was discovered the statue was made sometime during the 13th and 14th century. The Burmese army were about to pillage the city. So the Golden Buddha was covered in plaster to conceal it’s true identity.

The secret was so good that after those who knew of its true nature died, it remained hidden for 400 to 500 years.

What does that mean for us?

We are like that statue. We were born with unlimited potential. Through the years more layers were added upon us. Somewhere along our journey, we were led to believe a life of conformity was our true calling.

Soon our happiness, passion, excitement, and love of life slowly faded away. Replaced with frustration, stress, sadness, and dreading another day at our horrible jobs.

Yet, we have something inside of us that is more valuable than gold. It’s our best self, doing what we love every single day.

It’s time to take back control of our lives and stop living how others expect us to live. We have to live how we want to live.

Remember that we become The Choices We Make, and those Choices determine our Character. Become the new you today.

← Shaken To The Core