Who is an alcoholic?

Growing up in an Irish family, with relatives and friends who seemed to perpetually gather throughout the year, I was no stranger to, nor was I fearful of alcohol. Although I had seen my parents fight at times because my dad had 1 to many to drink, they fought for other reasons as well. My grandfather even had a shot and beer every day for 76 years. Alcohol simply was part of the family dynamic, maybe even the glue that held my family together. 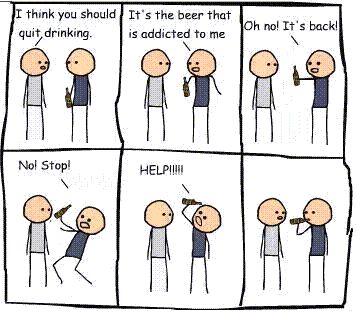 My wife only drank beer too

My wife’s family seemed different than mine. Her father is a successful entrepreneur owning a company that operates around the world. Her mother a saint (I am sure she rests in heaven), who not only raised the kids, but took care of her husband. They grew up either German, Hungarian, or Austrian with a bit of Irish and French on mom’s side. Alcohol was not a big part of the household. After successfully running a multi-national company, my wife’s father had not drunk alcohol in years when I met him. He explained that running a company where hundreds of families relied upon the company, he could not afford to drink. And her mother had a glass of wine with dinner occasionally, but not much more.

Our families now together, and from this background, I just never thought the ill effects of alcohol would make it into my home. Never did I believe that I would have to struggle; struggle like what I thought were the skirmishes of dysfunctional families.

Never did I believe it would hit right at the heart of my marriage and family. That alcoholism would cause deep feelings of shame, failure and embarrassment for me. I never knew that I would have to hide such embarrassment from my friends and even family.

But this did happen to me. The warning signs were there, the clues, the sirens.

My wife would leave the house for hours and come home late; she might not come home until early in the morning. She always an excuse and made a promise to not let it happen again. Then she would disappear for 2, 3, or even 4 days at a time. Her vanishing act always seemed to happen when I was out of town, and the kids were left without supervision.  (we have 9 children who range today from 32 to 12 –at that time 26 to 6). And finally in February 2008, she was gone! I with 7 of 9 children (2 out of the house, 3 in high school and 4 in grade school) were alone.

My wife was/is an alcoholic. I guess anyone can be an alcoholic, even those whom you hold dear.

← The Liver – What is it?
An unforeseen consequence →

5 comments for “Who is an alcoholic?”